I know, another eon between updates. Oops!

Thank you so, so, so much to everyone who has been supportive of this band. I can't express how appreciative, humbled and honored we are.

So, onto the next thing:

THOU // CLOUD RAT SPRING 2014 US WEST COAST TOUR is confirmed
April 11th - 28th. Dates will be up shortly... The tour is almost booked solid, just have a bit more to go.
To our East Coast friends: Very sorry that we aren't coming back yet. But I assure you all that we will be back before the end of 2014, promise!!

Hopefully we will be better at getting our shit together in the coming months. Merch and replying to emails and interviews and blah blah blah. It's pretty challenging to juggle being a parent, being in a love relationship, work, bands, social life, and everything else. All three of us are busy folks, and unfortunately that means that Cloud Rat has been getting neglected during the second half of 2013. Please forgive us if we ever were short with you, didn't respond to an email, or blew off an interview. We sincerely apologize for all of those things.

We've been writing a little bit, but haven't really been able to practice much this year. That should start picking up again as well. So look forward to new material probably late next year, as well as the LONG delayed ORGULLO PRIMITIVO / CLOUD RAT SPLIT 7" to be released before the Thou tour!

Cheers, loves. Miss you all heaps. 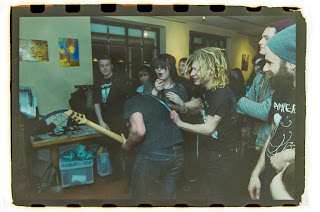 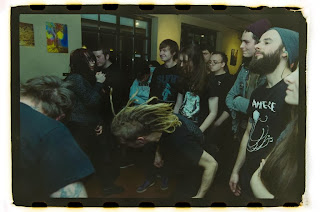 Finally another update! A very small one because, sadly, there is still not much time for the Rats on the interwebs.
THOU // FALSE // CLOUD RAT TOUR V2.0 IS OFFICIALLY HAPPENING AND IS BOOKED. Check the upcoming gigs page.
November Coming Fire Fest and 305 Fest both have fucking insane lineups, so don't miss out on those. SO STOKED.
Halo of Flies will be stocking shirts for us soon, because Cory rules and already spends a lot of time internetting for the label. It just makes sense!

Hello loves. Yet again, long time no post. What can I say? It's fuckin' summer in Michigan and we've got other shit to do.
Between working, hanging with our friends and family and lovers and kids, enjoying the rivers and forests and beaches and parties, and people playing in other bands, we just haven't had much time for the Rat. Buuuuut no worries, someday we will get back in the swing of things.

Upcoming shows:
Friday July 5th @ The CAID in Detroit with Panzram, Green Dreams (I think?), Germination.
*We are NOT PLAYING at the Magic Stick in Detroit July 11th. I don't know who booked that show, but we never were asked or confirmed, so that flyer is false. I believe that Madison's band Esper is playing though?*
August 7th in Milwaukee https://www.facebook.com/events/203043516518999/
August 8th in Minneapolis
August 9 - 10: Arsonfest in Winnipeg https://www.facebook.com/events/150503261784501/
August 11th - Duluth?
August 12th - Marquette?
THOU / FALSE / CLOUD RAT DATES ARE............ UGH. Still in the works. Hopefully sometime in September. Shit is crazy right now for everyone, hard to get it sorted out.
November Coming Fire Fest in... November
305 Fest Miami in December.
Bunch of stuff next year, no solid plans right now though. East Coast, West Coast, South Coast, International again???

So basically, in short, expect the rest of 2013 to be relatively slow for us. After all that touring, we needed a break and we meant it, apparently. Apologies to everyone for dragging our feet on interviews and merch stuff. It is what it is, just not a lot of time for it. May be some new interesting developments/gigs/etc cropping up this year, but it's hard to say.

In the meantime, support the many other great artists doing good work out there. Support ya local community and farmers and people doing cool things. There are too many negatives in this world, keep spreading the good shit.
Will try to keep this updated.

They say "Home is where the heart is". Our hearts are everywhere now.


Hello friends! Long time no post eh?
Europe was so fucking awesome. So much love to Lich, Resurrectionists, Republic of Dreams, everyone who booked the gigs, made food, had lovely conversations, played Kicker with us, had drinks with us, shared adventures and good times, let us sleep at your spaces, etc etc etc. WE LOVE YOU SO MUCH UGH. Hope to see you all again maybe next year!

SO. Updates.
With so much sadness, we have to cancel playing Shut Up Fest in Lima, Ohio April 26th. We are super fucking bummed about this, and it is totally my fault for overbooking us. There has just been so much going on lately, and I bit off more than I could chew this time around. I need time with my daughter and Shut Up Fest just happens to fall on a pretty important weekend for us to go to some local events that will be really fun for her (and me). So to all of our friends playing and attending, and to Trashy, Michelangelo and Niteskool, we are sorry for letting ya'll down. :( It will be a rad fucking time.

We ARE however playing Michigan Meltdown in Grand Rapids on June 8th, and Arson Fest in Winnipeg on August 9th and 10th. We will probably do a few dates around Arson Fest as well.

Other than that, nothing going on for us until Early/Mid September, which will be something very exciting. But we can't announce that until we get it confirmed for sure. Think a short tour with two of the best bands on the planet, bands that we toured with a couple years ago.... HMMMMMMM.

We have some shirts and small patches left over from Europe tour. First come first serve, let us know if you would like one and I can get em shipped out. We are pretty much all out of records other than a few Europress Moksha and Autarkeia split 7"s.

All right. I think that's about it. We won't be writing much or recording for a while, so don't expect any new Cloud Rat material til probably mid 2014.
Email us and we will chat with ya.
Cheers and much love to all.

Hello everyone! I am currently typing this while sitting in Oli from Lich's living room in London. We made it! First show of tour tonight, very excited. Sending love to all of our friends whom we miss very much.
Europe friends, here is an updated list of gigs:

Hello everyone. Just checking back in with a little update. All is going fairly smooth in the Rat camp. We are almost all geared up for Europe, just getting shirts and patches printed and shipped. Other than that, we're ready. The dates are mostly all getting confirmed nicely, so that rules. Getting to play with a lot of killer bands over there, super excited.
In other news, life has been a bit rough lately. Had a couple friends pass away recently, and with everything else going on, it's been hard to keep up. Thank you so much to everyone who has had positive things to say about Moksha, and to everyone who has been helping us along with Euro tour stuff. It means the world to us, I don't know what we would do without you. Probably not a goddamn thing.

And now for some interviews and reviews.

Interview with Grind and Punishment:
http://grindandpunishment.blogspot.com/2013/01/their-bodies-performance-machine-cloud.html

Hipness As A Second language:
http://hipnessasasecondlanguage.blogspot.com/2013/02/cloud-rat-moksha.html

a lot is going on.

We chase misprinted lies. We face the path of time...


We just want to thank everyone SO MUCH who has had positive things to say about the record. We are really proud of it, and put a lot of time, effort, love, and soul into this. It's nice to hear what people think of it.

Sorry for taking so goddamn long to update this. Added Moksha to the Discography/Lyrics section, added the European tour dates to the Upcoming Gigs section, and added some videos to the Vids sections. We will keep updating the Euro tour dates as we know more. Speaking of Moksha, we have the records and are just awaiting the inserts to get here, and then they will be done and ready for sale. So far it has been getting a lot of positive responses, thanks to everyone who has been checking it out!

Ok, so I am skipping doing a giant tour thing about our US/Canada tour with thedowngoing, because I suck. But mostly because I am super busy and just don't have time. Let me just say that it was fucking amazing. Thedowngoing rule, Water Torture rules, most bands we played with were great, hospitality was in full effect everywhere. Canada was awesome, going through the border was hilarious (the border guard was concerned for our safety because we were playing "basement parties" in "really terrible neighborhoods". The Canadian Rocky Mountains were godly. California was great, everywhere was great. So many friends, old and new, thank you all. We love you so much.

Europe is next. Very excited / a bit nervous / a bit stressed trying to get everything organized. After this tour we are taking a break. But will probably start doing some things again in the Summer. After the Orgullo Primitivo split 7", we probably won't have any new material until 2014, slowing down a little from now on. I think 2 LPs, 3 split LPs, a split 7" and a few compilations is a lot for only being a band for a little over three years. It would be pretty tough to keep that up.

Hey everyone. Sorry for taking forever to update this. Will return soon with a tour update and more! LOVE LOVE LOVE YOU SORRY SO EFFING BUSY ALL THE TIME UGGGGGHHHHH
No comments:
Newer Posts Older Posts Home
Subscribe to: Posts (Atom)