The dates are set. We are recording a shitload of new material to go on numerous records. Drums and guitars are being done February 25th & 26th. Vocals will be recorded most likely within a couple weeks after that.
I can't wait.

The weekend was so good. Appleton, Milwaukee and Fort Wayne were all great. Jason Ellis is one of the greatest people on the planet, I am convinced. Thanks so much to everyone in every town who was awesome. Also, we got to hang out with our lovers in False once again. SO GOOD, WE LOVE YOU FALSE UUUGGGHHHHAAAAAA MISS YOU SO MUCH.

Okay, so that's out of the way. The tour in March is all booked, just awaiting details on few more of the shows. We are writing a ton of songs right now, gearing up to do 3-4 different records, it's pretty silly. But we are stoked on the material. It will be a while before any of it is heard, probably not til May now. Sorry! Adrian's other band (Old Soul - oldsouloldsoul.blogspot.com) has been writing and recording, taking up our time damnit! Haha. Plus, Madison lives in Detroit and is in 5,000,000 bands. it's hard for us to get everything sorted out so quickly. But, fear not, as we will record in the near future, and I think that the new stuff is shaping up pretty well. I can't wait.

Here is the video of our set at DIY VS DOMESTIC ABUSE V in Milwaukee:


In other news, everyone's life fell apart upon returning home. But it's gonna be OK, the pieces are being picked up as we speak. The power of positive thinking.

the audio sounds insane!
demons i tell ya!
1 comment:

Our little weekend excursion is coming up, I'm excited! Hope to see lots of lovely punk faces in Appleton, Milwaukee, and Fort Wayne.
So some nice folks have had some nice things to say about us recently, and I figured I would post them up on here. Thanks bunches!
http://grindandpunishment.blogspot.com/2011/12/grind-in-rewind-2011-20-of-11.html
http://mindintrusion.blogspot.com/2011/12/my-top-ten-of-2011.html
http://www.lukephysioc.com/blog/top-20-albums-of-2011/
"This is what you shall do: Love the earth and the sun and animals, despise riches, give alms to everyone that asks, stand up for the stupid and the crazy, devote your income and labor to others, hate tyrants, argue not concerning God, have patience and indulgence towards people, take off your hat to nothing known or unknown to any man or number of men... re-examine all you have been told at school or church or in any book, dismiss whatever insults your own soul, and your very flesh shall be a great poem and have the richest fluency not only in its words but in the silent lines of its lips and face and between the lashes of your eyes and in every motion and joint of your body."
-Walt Whitman,
4 comments: 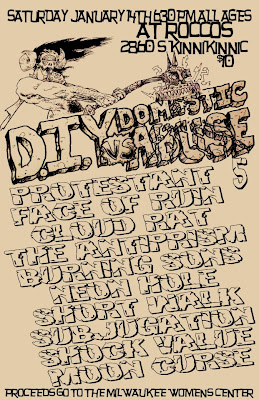 Xtra Vomit was originally supposed to be with us on our little upcoming weekend jaunt. Sadly, they can't go now. Goddamnit! They were originally going to be our tour-mates in December as well! And the XV/CR Split LP is taking forever too. Everyone email them and give them a hard time. They are the best, and they need to be seen and heard!
Our March tour is shaping right up. We only need help with the Pittsburgh show now! Burlington VT is still mildly up in the air, but we've got a couple friends working on it.
Ok. So we keep talking about summing up the rest of our December tour. Now I'm feeling lazy about doing so. Its been too long. And now there are lots of other things happening. Haha.
Let's just say that it was amazing. Not one bad show. Thou and False are our BFF's. Both bands are amazing and amazing people. Fort Myers is our favorite place in the world due to Nevin, Aysa, Joe, Jesse, John, and every other lovely person there. Miami was cool, Chris Donaldson is a babe. And a swell guy all around. Fiz aka Punk Celebrity aka founder of the Rockpile Crew (whipin' Bywater Clown Punks off the face of the Bywater, or what not), Fiz. What a person. We love you Fiz.
On the way to Tampa, we all (Thou, False, Cloud Rat plus Fiz, Sock, Jonia, and our good friend Ben from Crow's Foot, 18 of us) went swimming at this neat little beach in Sarasota. What an awesome time, I'll never forget it. We all held hands and ran into the ocean, then dolphins came up to us, probably within about 30 feet. Nuts!!!
Tampa was great. Played in a little storage unit (#19). Show was crazy. People got buck. Thou did a Beastie Boys cover and a Born Against cover in the same set if I remember correctly. CJ, Pat, and all of Nazi Dust were awesome folks. Great band.
The next day was our parting with Thou and False. So sad. We all went to a little house show during the day, where Merchandise played in their living room. I love that band.
Tallahassee was fun. Last show ever at the Farside. Kids went silly. Tony rules. Rosie, we love you. There was a little altercation here, where a guy was being a sexist, disrespectful prick. I called him out, we talked about it for about 20 minutes, then he apologized to Madison. I feel like it was genuine. Cool.
Athens got crazy. I had to stop right in the middle of a song and almost fight this belligerent drunk guy. Bummer city. However, the rest of the show was fun, and everyone else were dears. Gripe were killer. Much love to Spencer and all of the wonderful folks we met there.
Atlanta was excellent. Thanks so much to Seth, what a sweetheart. Dead in the Dirt were sweet. So was the wonderroot. Good stuff.
Knoxville ruled! Thank you Andy! Killer Whale was amazing, make sure you check them out. Surf punk/hardcore/grind/black metal. This random guy gave me a back rub, and them he and his group of friends proceeded to club dance the whole time during our set. I loved it. There was a circle pit, and in the middle people were grinding. Wow. But in between songs they would stop and listen. I think they actually really liked what we doing. Super cool in my book. In the morning we went to this little downtown festival thing. The guys in Killer Whale were doing Food Not Bombs, awesome. Madison left her fanny pack there, and one of the guys swooped it up and waited for like 20 minutes for us to come back!!
The Leathershop in Lima was pretty cool. I LOVE Pizza Hi Five/Mike/Trashcan/Niteskool. Best people. Awesome band(s). However, sometimes some fucky folks come out to the Leathershop and make it not the most comfortable atmosphere. There were some supremely drunk folks there being supreme jerks. Yuck. Don't let this steer you away from the shop though, as I have been there plenty of times where there were no fuckheads. Just happened to be one of those shows I suppose. There were also a lot of great people there. PHF killed everything. SO GOOD.
Bloomington was amazing. Thank you so much to Nathalie/Micah/John/Zach/Rat Storm. We made some great new friends here. Izzy/Lioneater was so good, we all loved it and got tapes. Fort Vegan is such a cool house to play at. Yes!!
Well, there. I guess I wasn't too lazy to do it. Haha.
1 comment:
Newer Posts Older Posts Home
Subscribe to: Posts (Atom)